How to do an 820-2915-B Apple Logicboard GPU repair or replacement?

The Apple MacBook Pro 15 inch is widely known to have video issues. The no video issue is present in the Core2 Duo from 2009 to 2010 and the Intel iSeries from 2010 to 2012. Our office fields nearly 1 to 5 calls a week in regards to the 2009 to 2012 15 inch MacBooks from all over the country. The typical issues are scrambled video, gray lines, scrolling video and partial boot options.

Most customers state that Apple, an Apple Authorized Service Technician, Apple Authorized customer service, or a third party Apple retail location such as MicroCenter, BestBuy, SimplyMac, or the likes have notified them their unit is under a recall and warranty repairs can be performed.

Does AppleCare not cover this repair on an 820-2915-B logicboard?

This is not true. The website, https://www.apple.com/support/macbookpro-videoissues/, did give an individual steps on how to get a recall repair under the extended AppleCare support. The MacBook Pro systems that were covered were sold between February 2011 and December 2013. As quoted on the Apple website the following is the terms to fall under extended AppleCare:

With this being, stated Apple will no longer extend warranties or offer them outside these terms.

A customer has two options to get the unit repaired. A customer can purchase a logicboard from eBay, Amazon, or any number of stores found through Google or the customer can get their current board refurbished. Most of our calls want to compare purchasing a new board versus getting a board repaired. Our office reminds the callers that at this time most all boards if not every board for sale online is a refurbished or recertified working pull from a broken MacBook, ie. Screen, keyboard, or such.

Our office can refurbish the logicboard in your MacBook for nearly half of the cost of purchasing a refurbished board from eBay.

Our experience is that most companies, including Apple and their third party Apple Authorized Service Centers, only address a very limited portion of the failure in the logicboards. The standard explanation is that the chipset has failed due to heat or solder. This statement tends to be true. Heat does cause the units to fail. In the 820-2915-B the issue is pointed toward the AMD Radeon chipset failing to include the Intel 3000 or Intel 5000 shared video chipset. The 820-2915-B logicboard has dual video GPU chipsets and depending on the task switched between the two.

Our office follows the steps in this order: reflow, test, stress. If the chipset fails simulation then we go from reflowing to reballing, testing, and then simulated stressing. Our repairs on the 820-2915-B logicboard series tend to not fail beyond the reflow process due to our standard in-office procedures.

By default, it is configured with 4 GB of 1066 MHz DDR3 SDRAM (PC3-8500) installed in pairs (two 2 GB modules), a 500 GB Serial ATA (5400 RPM) hard drive, an 8X DL “SuperDrive”, and dual graphics processors — a NVIDIA GeForce GT 330M with 256 MB of dedicated GDDR3 memory and Intel HD Graphics with 256 MB of RAM shared with the system — that Mac OS X automatically switches between for better graphics performance and better battery life, respectively, depending on application use.

This model uses a “Unibody” aluminum case design — milled from a single piece of aluminum — and has a backlit keyboard, a new “no button” glass “inertial” multi-touch trackpad, and a non-swappable battery design that provides up to 8-9 hours of battery life.

Compared to its predecessor, this model has a very similar external enclosure, but an enhanced trackpad, and the same connectivity, except for the enhanced audio passing Mini DisplayPort. Internally, however, it has a substantially different architecture with a faster “Core i5” processor and faster graphics as well, although it shares the same memory. Battery life hass improved too. 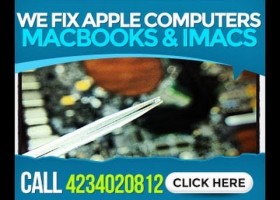